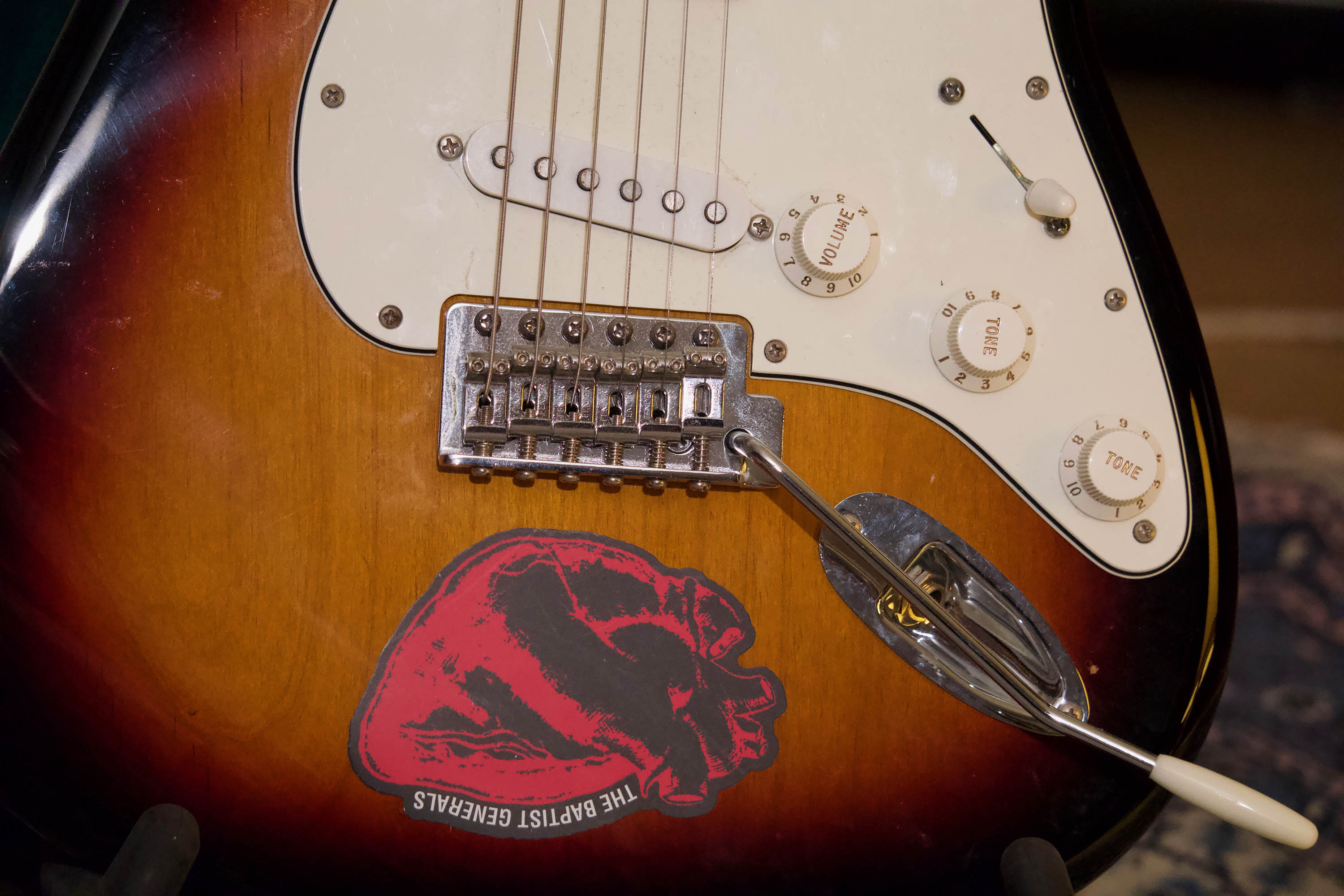 ‍
Guitar stores and people who frequent them were the main reason we had never considered owning one before. Also, blues lawyers. Also, Eric Clapton and all that.
A healthy dose of Polvo helped us get over that.

A couple of years later we had decided we needed a Strat of our own for the studio. At that stage, the dollar was no longer super cheap for us, and prices for vintge instruments were already pretty idiotic. On safari through NYC, some 70s Strats were tried at Southside (those were terrible. Nice paintjobs though), various Strats were tried at Main Drag (same story), and then half of what Ludlow had in store was tried as well.
As far as feel and sound of the instrument goes, this Mexican Strat was the real thing, beating out all the new American made ones - and the dodgy vintage ones for sure. It does the strat thing, where it makes you feel like a slightly more confident guitar player than you are. It sits on your body just right. The in between positions make you want to play Sultans Of Swing immediately. The bridge position makes you reach for Television. You know, it's all there. So it joined the list of fantastic gear we bought at Ludlow (how we miss that store, and how we miss the LES). To make it feel like ours, the Baptist Generals sticker was added a day or so after it was bought and has stayed on ever since (Sidenote: listen to more Baptist Generals!).

A couple of years later our guitar tech convinced us of Kinman pickups. Again, reading about them we had all the usual concerns (blues lawyers! or maybe, in this case, blues legal aides!) but we tried them and they made this guitar REALLY shine. They are indeed dead quiet (which we didn't really care bout), but most importantly they add a sort of piano-like chime and authority to the sound which is quite fantastic.

Many inspirational guitarists talk of how the best results are often achieved with an instrument that has you struggle with it. That puts up a fight. This one is the opposite. When the fingers are hurting already after a long session, when muscle memory seems wonky and off by a half step most of the time, when each and every guitar neck feels angled the wrong way just slightly - this one will be a welcoming home.When Locas In Love made a trip to All Tomorrows Parties in Upstate New York we saw countless fantastic concerts, but not least we were struck by just how many people played Stratocasters. Built To Spill had more Strats on stage than we had seen at shows over the two years prior combined. They also sounded pretty great.