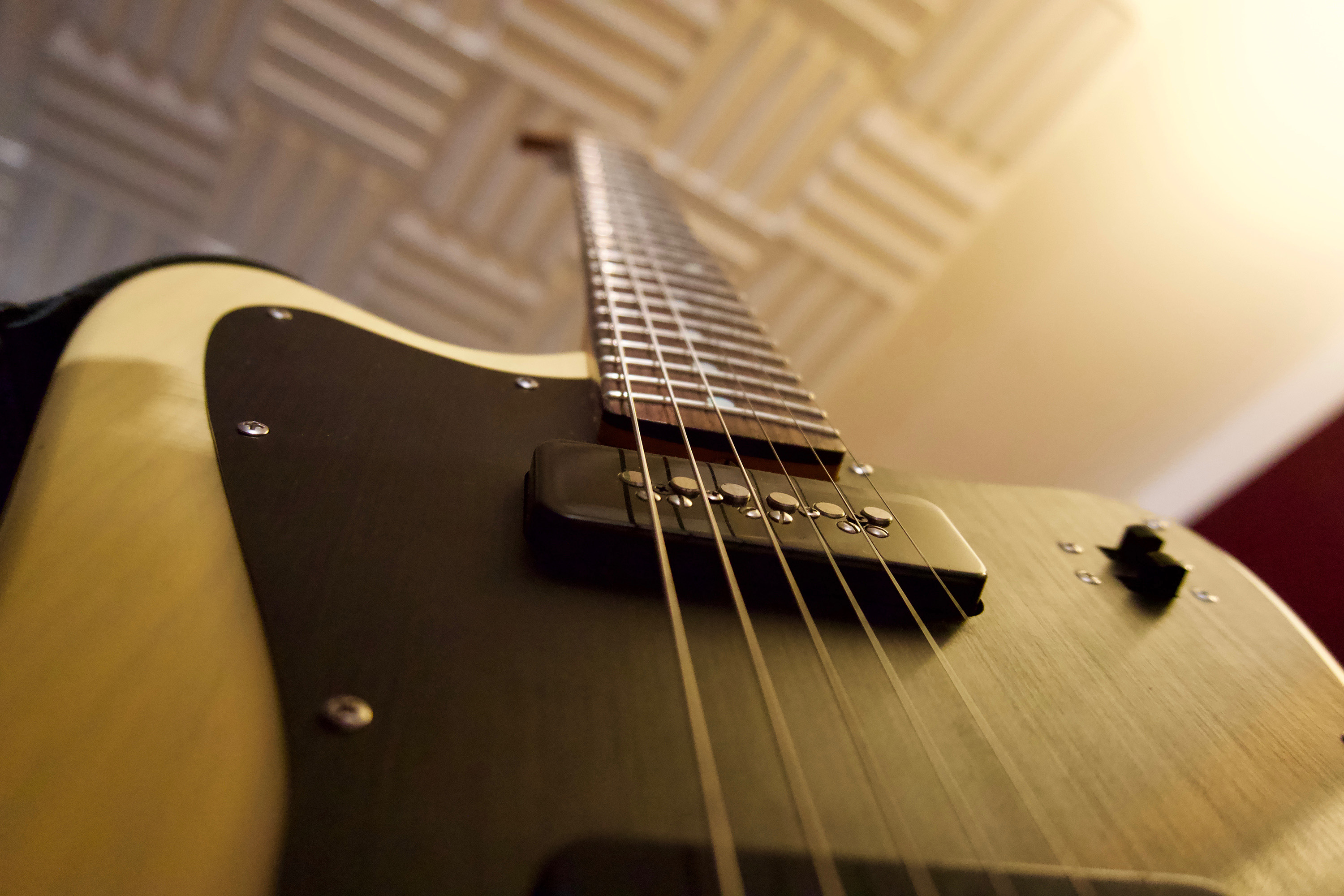 This was the idea: To have an offset guitar with a smooth Mastery tremolo, simplified controls, one P90 and one D'Armond Style pickup, a hefty neck and paint that feels very light, almost like those Gibson "faded" series guitars. The final result got really close to a lot of these things, but luckily also ended up being its own thing rather than some kind of mixed bag.

‍
The two rotary knobs are one volume (duh) and one pickup selector. These are much less likely to be knocked about accidentally mid-song than toggle switches, which was a requirement. The pickup selector does Neck, Neck + Bridge (in series), Neck + Bridge (parallel) and Bridge. This is a lot of options already, but the one slider adds a "Jazz" setting to the bridge pickup (basically it dulls all the highs - we hoped this would be great for fuzz - and it is! - but it also has an interesting effect on the combined sounds). All in all, a lot of sounds with a minimum of switches / potis.

‍
The pickups are one Deimel P90 in the bridge which sounds absolutely fantastic, and a TV Jones T'Armond in the Neck position which I might want to replace at some point. It was added, because the D'Armond in the 90s Gretsch Gold Sparkle Jet we have is just about the greatest bridge pickup sound - it is percussive in all the right ways, it has that short (non-)sustain that Jeff Tweedy likes, it growls with an overdriving amp - just marvelous. Turns out, this kind of pickup does not sound like that in all guitars (duh, again) and it is just a tiny bit brittle in this one. The I have not changed it yet is that it sounds fantastic im combination with the P90.
‍
The mastery trem is a thing of beauty. It does the wiggly Nels Cline thing - at least it would if the player could. Interestingly, it feels less at home doing the MBV strum, which somehow feels more natural on a standard Jazzmaster trem.
Frank Deimel suggested the reversed headstock. It's not the greatest look (we think), but the tonal balance between strings, and the tension from string to string is indeed fantastic.
‍
Oh, lest I forget - the second slider adds the Piezo disc pickup that Deimel like to put in their guitars. It's a cool sound, one that would get a lot more use if we had more people coming through who use looper pedals for percussive loops I am sure.

The sound of the guitar could be described with words like "chime", "clarity" and suchlike. It is bright, but in a different way than other instruments we have. It works great with the Swart amp, and surely would work brilliantly with any 5E3-ish amp.

We knew of Deimel guitars mainly through having recorded a few records at Studio Blackbox in France, run by Frank Deimel's brother Peter, who is an amazing engineer, equipment connaisseur and all around great guy. In Peter's collection at Black Box, it was especially a Jazzmaster-style guitar that was there during our Use Your Illusion 3+4 sessions we fell in love with. But we'd had Frank Deimel's custom guitars on our radar for ages, among others because of the pretty special guitar he had built for Nikki Sudden with whom we had played some shows with in the early days of the band. While waiting for the guitar, The National started using Firestars regularly - another band we had played with, and shared a producer with.

Over the years I have had a few nice guitars that I did not hang on to. A Gibson Custom Shop Les Paul Junior that I could not really afford. A Travis Bean that I liked the idea of more than I loved (or played) the actual guitar. Incidentally, both of these were bought (and sold) in times where I repeatedly fell behind on a couple of months of rent. But money aside, I have sometimes felt weird about expensive and/or real "vintage" guitars. I generally want instruments that are meant to be played. I actually like seeing marks on them and remembering the inscribed moments: "oh, that's when we played a tiny stage and I hit the cymbal stand". And I like these moments not to be mixed with "Oh, I just knocked $500 off the value of this collectable guitar".
All of that fed into the decisions made when configuring this Firestar: The general design is clearly not made with ever re-selling the instrument in mind (a lot of guitarists who visit our studio are puzzled by the hefty neck, the rotary pickup selector etc). I also asked for the thin lacquer not mainly because of sound, but because I knew I'd add the first few marks on it in no time at all, and would stop worrying going forward. That latter bit has worked very well, and having an instrument that is built so that it makes sense for me feels priceless still. Especially when other guitarists enjoy playing it not despite, but because of its weirdness and off-kilter beauty.